Today I’m delighted to introduce you to Lise MacTague as part of Diverse Books Month. Lise lives in Wisconsin and writes across several genres, including Sci-fi. She writes for a lesbian audience and her debut novel, Depths of Blue, was published by Bella Books in April 2015. She’s a clear and refreshing voice on the topic of diverse fiction and I hope you find her interview and post as interesting as I did!

1. What does the term “Diverse Books” mean to you?

To me, the term “Diverse Books” means a book that represents a diverse experience, by which I mean a non-straight white male point of view. Straight, white, and male have existed as an ersatz default setting for people for too long. Plenty of books have been written from that pov, and plenty more will continue to be written. However, room exists for multiple voices and for multiple points of view. A diverse book doesn’t necessarily have to be written about a gay, ethnically-diverse female, but a change to one of the so-called “default” demographic characteristics is always welcome. Of course, diversity is not limited to gender and ethnicity. It can include differences in almost any societal norm, including weight, mental capacity or illness, and many others. True diversity comes not simply with the token diverse character, but in the creation of an environment that reflects the diversity we all live with from day to day.

2. Your biography states that you write for a lesbian audience. Is this a demographic direction that grew naturally as you developed your writing, or was it a conscious decision to write for that audience?

Writing for a lesbian audience has always been a conscious decision. I had a hard time finding lesbian fiction when I came out, and it was difficult for me not to be represented in what I like to read. However, even within lesbian fiction, it was difficult for me to find the types of books I most enjoy reading. Having a female protagonist (or two) only went so far. Science fiction and fantasy has been my bread and butter since the third grade, and the genre is extremely under-represented in lesfic, so I decided to write my own.

3. What do you see as the main challenges facing authors of diverse literature?

One main challenge is to keep writing the stories that need to be told, not necessarily the ones that your community wants to hear. When writing for a small community, there’s the risk of preaching to the choir. At the same time, no one wants to tell stories that no one will hear. I think there’s a balancing act to be found, wherein one has to write to one’s audience without alienating them, while still trying new things and stretching the boundaries of what has “always” been known.

4. A common theme we’re seeing this month is authors feeling that the way they feel they have to brand their books as diverse puts them at risk of segregation and being “invisible” to readers. What is your view on this and do you have any ideas for breaking down social and cultural barriers in the literary world?

I’m of two minds on the topic. On the one hand, it’s important that there be a diversity of views in the world. Fiction is a powerful tool for spreading new ideas, and sci-fi especially so. Fiction (and sci-fi) should reflect the world back to us as it is, and yet it often reflects one particular corner of the world or a narrow set of experiences. On the other hand, I write for a specific target audience and I want that audience to find my books. Without the branding, they are much less likely to find them. When it comes down to it, I’m writing for lesbians. If men, gay or straight, want to read my books, I have no problem with that. I will be just as tickled to find out that they enjoyed them as I will be to find out one of my people enjoyed them, but men are not who I have in mind when I write. In that way, my novels do not represent a completely diverse point of view. I think it’s very difficult to be diverse in all ways in one story. Instead, I think it’s important that we, as authors, be mindful of the worlds we create. Diversity should show up across all books in ways that make sense to world-building and plot. I want my readers to get a sense of the diversity of some of my worlds, the same way I do when I go out into my neighborhood. Consistent, realistic, and nuanced descriptions of the under-represented will go a long way to diversifying our fiction. When those descriptions become so ubiquitous as to disappear into the fabric of the story, rather than to be remarked upon, we will truly have diversified fiction. Sadly, I feel that day is a long way off.

5. Please share with us some of your favourite diverse authors and/or books.

Wen Spencer’s A Brother’s Price offers a fascinating look at a matriarchal society where men are the ones who are powerless and locked up for their own protection. David Weber’s Honor Harrington series offers a long exploration of a very diverse future society where gender and ethnic origin mean very little to the intrinsic worth of the characters. His main character is a woman of mixed-Asian descent, and there is very little that can stand in her way. Jean Stewart continues to be a favorite of mine for her diverse handling of a post-apocalyptic Earth where lesbians have carved out their own society. Her Isis Series is set in a diverse society where women of all ethnicities live and work together in a traditional lesbian utopia. Though it may be dated to some, the series represents an evolution in lesbian fiction that picks up where the lesbian utopian ideal first introduced in Katherine V. Forrest’s Daughters of a Coral Dawn leaves off. 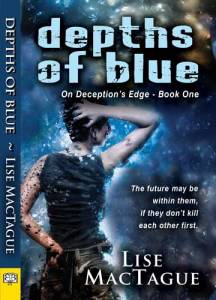 Lise has written a piece entitled Searching for Lesbian Sci-Fi for us and it’s a piece I think most of us can relate to on our own journeys of discovery.

I came out as a lesbian in the late 90s. At the time, I was finishing up my degree at art school and trying to figure out what I was going to do with my life. The summer between my first and second senior year, I discovered Xena: Warrior Princess. This wasn’t my sexual awakening as a lesbian, that happened when I watched the original Stargate movie in 1994, but that’s another story. Rather, Xena was the first time I can remember seeing an integral part of my identity represented on television. It was all in subtext, but the relationship between Xena and Gabrielle was plain for me to see, and I suspect there are a large number of lesbians my age who feel the same way about the show.

The experience of seeing a lesbian relationship on TV, even cloaked as it was in subtext, made me realize just how much I hungered to see myself in the fiction I loved. I have always had an affinity for Science Fiction and Fantasy, in all of its forms, though none as strongly as epic fantasy and space operas. I looked through the books in the sci-fi section of the local big box bookstores. There, I found some novels with female main characters, and I read my way through many of them. What I didn’t see was a representation of lesbian characters. There was some mainstream fantasy with gay main characters, and the occasional sci-fi or fantasy with a gay or lesbian peripheral character, but I couldn’t seem to find what I for hungered so desperately.

So I turned to the internet, fledgling though it was at the time. Through the magic of fan-fiction, I discovered that there were indeed people who wrote fantastical stories about lesbians. My first foray was Xena fanfic, which I devoured. It was everything I had been longing to discover, and it was so much better to see the relationship between Xena and Gabrielle played out in the open rather than cloaked in layers of subtext. From there I discovered uber fanfic and I began to see how the characters might exist in other times and places.

It seems really obvious now that, of course there was this place where someone like me could find fiction by and about other people like me, but in the late 90s, it wasn’t so common. I was in my late teens/early twenties, and I had neither the confidence nor the resources to discover lesbian fiction on my own. Instead, I stuck to my Xena fanfic (and later expanded into Star Trek: Voyager fanfic), and trolled through mainstream scifi and fantasy for any mention of gay characters.

However, even the mainstream scifi and fantasy I could find that had gays in it, rarely dealt with relationships. There might be some mention of a relationship between characters, but it was usually as a plot device, and less as an end to itself. Eventually, I would discover lesbian fiction and would start reading through many of those. There I would find the depictions of lesbian relationships I sought, but many times without the benefit of the fantastic settings I wanted to see them in. I could find the two halves I wanted, but rarely in one story.
That’s not to say that there aren’t some fantastic lesbian scifi stories out there, there most definitely are. I read my way through Jean Stewart’s Isis Rising series, and Katherine V. Forrest’s Daughters of a Coral Dawn. Nicola Griffith’s Slow River is a favorite of mine, not just for being lesbian *and* scifi, but for having a well-thought-out and well-executed dual narrative. More recently, I’ve worked my way through Gill McKnight’s Garoul series, which is a fun and hilarious romp through modern paranormal lesbian romance. I have a list of books I still need to read. Octavia Butler has been on that list forever, to my shame. The list continues to grow, as more lesbian scifi comes out.

I started writing so I could see that list continue to grow and to expand in all directions. As is the case in mainstream scifi, there seems to be a glut of paranormal stories at the moment. I have nothing against paranormal fiction, I‘ve read more than my fair share and my current work in progress is paranormal in nature, but my first foray into novel writing was straight-up space opera, your basic “dykes in space” kind of premise. I intend to return to that universe multiple times, but I’m trying my hand at a number of different subgenres. Lesbian scifi is a niche genre within another niche genre. I’m never going to get rich by telling these stories, but I hope that in the telling, I’m expanding the traditional boundaries of scifi, at least a little bit.

Fiction helps us see the world in the ways that it is and the ways it could be. Diversity in fiction, and especially science fiction with its limitless possibilities, ensures that our future will encompass more points of view than our past has. My past and my difficulties in finding representation among the imaginary worlds I love, are what have led me to write what I do.

Thank you so much for stopping by the blog, Lise. It’s been a pleasure!

To find out more about Lise and her work, visit her website here: http://lisemactague.com/

4 thoughts on “Interview and guest post from Lise MacTague”