We are joined for Diverse Books Month by author Leslye Penelope. Leslye believes that love is magic and likes her romance with a healthy dose of imagination. She writes new adult, fantasy and paranormal romance with multicultural characters. She lives in Maryland with her husband, one eighty-pound lap dog, and an attack cat. 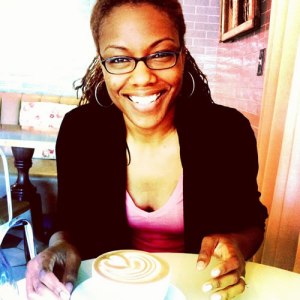 1. What does the term “Diverse Books” mean to you?
Diverse books feature main characters who represent a variety of people, not just a single perspective. Characters of different races, cultures, ideologies and backgrounds who look, speak and think in different ways, and reflect the world in which we live, not just of one narrow sliver of society.

When I walk into a bookstore or browse online and see a person of color on a book cover, I inevitably stop for a closer look because it’s still an all too rare occurrence. A movement for diverse books will be necessary until the array of book covers truly represents the people buying them.

2. You’ve moved around a lot in your life – how do you think this has affected you culturally, and has it had an influence on your writing?
Being an introvert, moving around a lot as a child was incredibly difficult. I withdrew into books, which was easier than talking to new people. My love of stories and the way they allow you to escape is one reason I’m a writer. I began crafting my own stories at a young age as a way to record experiences I could relate to.

Also, I was always in majority white environments—for several years as the sole black child in the school or one of only a tiny few. My high school was 10% black when I attended, and that was probably the most black folks I’d ever seen in one place. I ended up going to an HBCU (Historically Black College or University), which helped me the most culturally—at least as far as my racial identity. All of those experiences come through in my writing—I’m always dealing with themes of identity and inclusion/exclusion.

3. You’ve attended VONA/Voices twice. Please tell us a little bit about this program and what it has done for you on a personal level.
VONA/Voices is a yearly workshop for writers of color. I studied under amazing teachers each time I attended, Junot Diaz the first year and Marjorie M. Liu the second. A few weeks after returning home from my first VONA, I wrote the first draft of Song of Blood & Stone in 2 days! The experience unlocked some fountain of creativity in me and I went on to publish that book 18 months later.

Like many other writers of color, I’ve been in other workshops where I was uncomfortable with the level of critique given to my work. I’ve had to address questions about aspects of my stories or characters that were rooted in the individual’s ignorance or ill-conceived notions of black culture. There were misunderstandings and misinterpretations that left me discouraged and alone. At times, I felt fundamentally not understood and dispirited, which began to affect my writing. I longed for more diversity in the workshop—for one other person that could say, “I know what you mean.” So, VONA was a dream come true.

4. In your book Song of Blood & Stone (which has a truly gorgeous cover!!) the main character is feared for the colour of her skin. Is this a wider metaphor for segregation and, if so, how do you think we can break down those barriers through fiction?
Song of Blood & Stone is set in a fantasy world, and the prejudice in the novel is based both on skin color and magical ability. The non-magical people of one race fear and mistrust the magical people of another race, and my main character, being bi-racial, is caught in the middle.

For me, speculative fiction especially is an important way to view the strengths and weaknesses of our society through a different lens. I grew up loving shows like The Twilight Zone and Star Trek which both handled difficult social issues through a filter. That layer of separation allows the stories to be viewed and received without the emotion, pain and defensiveness that sometimes occurs when you talk about an issue head-on. It’s in this way that I believe fiction breaks down barriers and connects us.

5. Please share with us some of your favourite diverse authors and/or books.
Just a brief smattering of books I love from a variety of genres:

About Song of Blood & Stone by L. Penelope

Orphaned and alone, Jasminda is an outcast in her homeland of Elsira, where her magical abilities are feared. When ruthless soldiers seek refuge in her isolated cabin, they bring with them a captive – an injured spy who steals her heart. Jack’s mission behind enemy lines nearly cost him his life, but he is saved by the healing power of a mysterious young woman. Together they embark on a perilous journey straight into the heart of a centuries-old conflict. Thrust into a hostile society, Jasminda and Jack must rely on one another even as secrets jeopardize their bond. As an ancient evil gains power, Jasminda races to unlock a mystery that promises salvation. The fates of two nations hang in the balance as Jasminda and Jack must choose between love and duty to fulfill their destinies and end the war.

2 thoughts on “Interview with Leslye Penelope”