I had a light-bulb moment after seeing something on social media yesterday that I just had to share because it’s important and yet it’s one of those things that no-one really seems to know or understand about being an author.

Here’s the thing – when you start writing your book, there’s so much advice out there on how to do it. You’ll forge your own path but it’ll be guided by those around you in some way or another. It could be months and years of toil and heartache, throwing yourself to your demons again and again until you’ve got something that’s worth sharing. You’ll either then go through the Sisyphean task of attempting to find an agent or publisher, or you’ll do it yourself and begin the long process of editing and formatting and designing and promotion. It’s a long, hard slog and when you’ve finished it, you’ll feel like an anxious quivering jelly blended into a blancmange with the champion of the world. You’ll watch your baby go out into the world and bite your nails waiting for the first review, convinced everyone will hate it although there’s no fear of that.

And then it happens. The vast majority of your family and friends will either completely ignore your massive achievement or they’ll post something bland in lukewarm congratulations. I have a handful of friends from “before” I was an author who read my books and maybe five members of my very large extended family who read them, but no-one else in my near or extended family buys, reads or cares about my books. The friends that do muster up enough enthusiasm to sound genuine in their congratulations won’t translate to sales. (It’s important to add here that the friends I’ve made through my books aren’t counted in this world view). 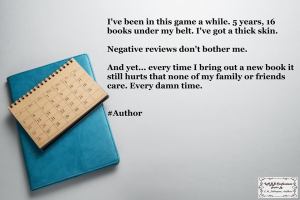 You wonder if it’s maybe just that the book isn’t their cup of tea, so you swallow your hurt and go back to the drawing board, but you put out another book and then another and the same thing happens. Resounding silence from the people that you’d expected to support your dream. You think it’s just you and then you go into any author forum or follow the author confessions and suddenly you realise that it’s a universal complaint. So many authors out there are bewildered and hurt that their parents and siblings aren’t buying their books or sharing their posts or any one of the tiny things they could do to make it a success.

It doesn’t get any easier, either. I’ve been in this game a relatively long time now. I think I have a fairly thick skin when it comes to my books. Despite the first week jitters and anxiety, I know they’re good because I have reviews that tell me so. I have readers who are passionate about my work, some of whom have tattoos inspired by my books, and the friends that do read them are so enthusiastic about it that they fill my heart with joy. But, as with the above confessor, it still hurts. Every. Damn. Time. It gets easier to brush off, but it hurts.

I had always assumed that it’s because my family aren’t really into reading or they just really don’t care what I do in my free time and then yesterday I was given a different world view on it that blew my mind.

You are amazing and your family and friends are so used to it that they take it for granted. They take your ridiculously massive achievement for granted because they expect you to do amazing things the same way that everyone else just gets up in the morning and breathes.

You are amazing and they know it.

So next time you hit publish and feel that tiny sliver of hurt in your chest, flip it and see it for what it is – a subtle compliment on your state of being.